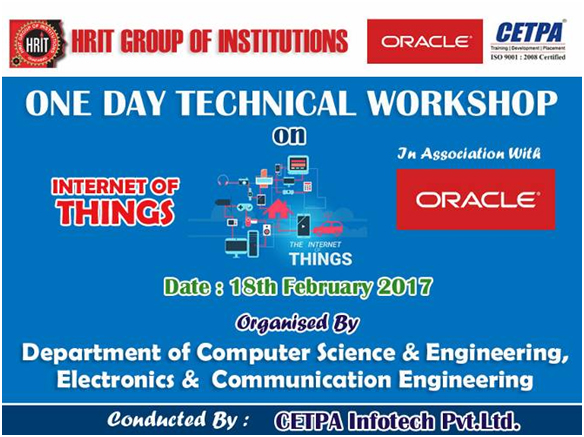 Department of Computer Science & Engineering and Electronics & Communication Engineering organized a one day workshop on INTERNET of THINGS (IOT) in association with ORACLE on 18th FEB’17 with a vision to make their students Techno-Friendly and to acquaint them with latest technological trends and fulfill its increasing demand in industries.
The workshop was inaugurated by Mr. Atul Bhargava, General Manager, CEL (Central Electronics Ltd.).Students from various disciplines viz. Computer Science and Engg., Electronics and Communication Engg. and Electrical and Electronic Engg. participated and got benefited. Mr. Anuj Rai, Manager ORACLE Workforce Development Program and Mr. Amitabh Chaturvedi ,Head HR,INTERRA IT were the Guests of Honour. Sh. Anil Agarwal, Chairman of the Group, Sh. Anjul Agarwal, Vice Chairman of the Group Prof. V.K. Jain, Director General and Dr. Ranjeet Singh, Group Director marked their presence in the Workshop. Prof. P.K Bhuyan, HOD CSE and Ms. Shraddha Sood, HOD ECE were the organizers of the Program.
Chief Guest highlighted the importance of IOT and its future scope in a developing country like India.Mr.Anuj Rai showed some interesting videos to demonstrate the practical utility of IOT.Mr.Amitabh Chaturvedi ,on the other hand, discussed that apart from the technical knowledge, the personality of an individual matters too, while building their professional career.
The workshop emphasized in imparting both theoretical as well as hands-on experience on IOT Technology. The basic idea was to create awareness about IOT and its usefulness in the society. Theoretical session was conducted in morning hours and practical session was demonstrated in the afternoon. At the end a small project was given to the students as a task and the winners were awarded certificate of appreciation and prizes by the Chief Guest. 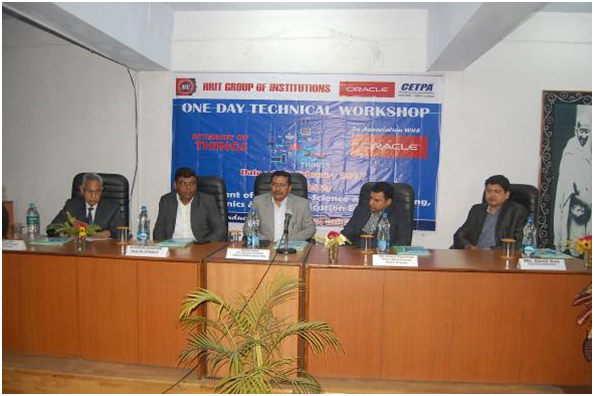 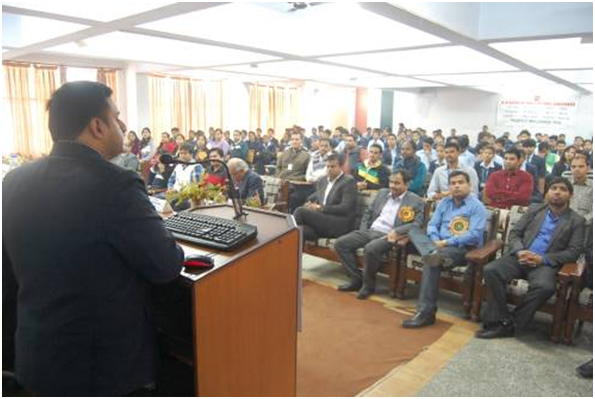 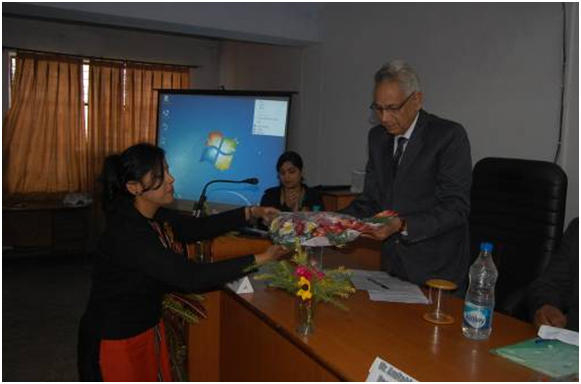 Department of Computer Science and Engineering &amp; Electronics and Communication Engineering , HRIT Group of Institutions, Ghaziabad organized an International Conference on “Recent Advances in Computing &amp; Communication Systems” held on Saturday 7 th May 2016.More than 300 papers were submitted for this conference but only 50 papers were selected and presented in the conference.

The program began with lighting of lamp followed by Saraswati Vandana. Prof. A.P. Mittal ,Member Secretary,AICTE,Government of India , the chief guest enchanted the students and other participants with his  valuable thoughts. He emphasized on rising  emergence of mobility ,e-governance,cloud computing,Internet of Things,smart grid,Big Data etc . 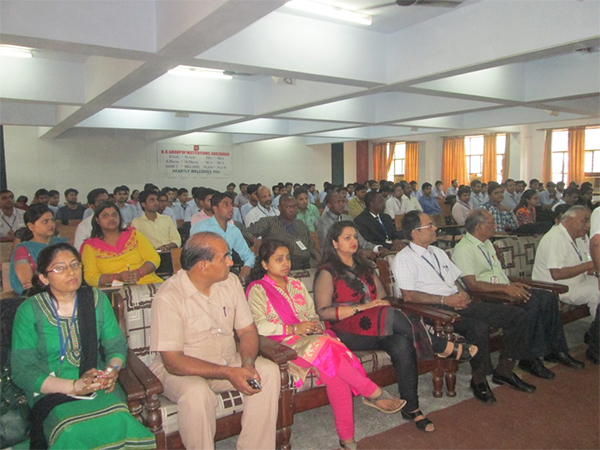 Prof. Yogesh Chauhan, Prof. &amp; Head, Electrical Engg. Dept.,Gautam Buddha University,Noida was present as Guest of Honour.He motivated the participants and students to keep themselves updated on the recent advances in electrical and electronics engineering. Er. Anil Agarwal,Chairman of the Group welcomed the delegates and spoke about the achievements of the college in last 11 yrs.

After the speeches of the Guests,Memento was presented by Chairman of the Group.Prof. P.K. Bhuyan ,HOD, Computer Science &amp; Engineering gave a presentation about the group and spoke about various industry collaboration ,Training Programmes conducted and Placement status of the group for 2015-16 batch.

The Technical session started by paper presentation from various renowned delegates. Prof (Dr.) V. K. Jain was the session chair and concluded the valedictory session. After the session was over, delegates were awarded certificates by the session chair. Finally, Dr. Ranjit Singh ,Group Director closed the conference with token of appreciation and vote of thanks to the eminent dignitaries. Faculty members of CSE, ECE department and various student volunteers put in their hard work towards the grand success of conference.

A two days workshop on ANDROID was organized by department of CSE, ECE and EN in collaboration with IIT, Delhi and CETPA on 4th & 5th March 2016.The workshop was inaugurated by Mr. Anjul Agarwal, Vice Chairman of the Group. Prof (Dr) V.K. Jain, Director General of the Group emphasized on the importance of ANDROID and its increasing demand in Industries.

The objective of the workshop was to give both theoretical and hands-on experience on ANDROID Technology. The idea was to give the students how to develop Mobile Apps by using Android. Android certified trainers from industries came to demonstrate the practical applications of ANDROID. Theoretical sessions were conducted on 4th March’16, the entire day and practical sessions were demonstrated on the next day. Students were taught how to develop mobile apps by using ANDROID. At the end a small project was given to the students as a task and the winners were awarded certificate of appreciation and prizes. 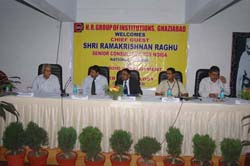 Department of CSE organized a national seminar on 16 April 2013 in the premises of H.R. Group of Institutions, Ghaziabad. The seminar was attended by more than 200 delegates and students from different part of UP, Rajasthan . The seminar was inaugurated Mr. R. Raghu , Senior consultant , TCS.
The program begin with lighting the lamp followed by Saraswati Vandana.Mr. R Raghu , the chief guest enchanted the students and other participants with his  valuable thoughts. He emphasized   the importance of web technology as major business catalyst. He also emphasized on rising  emergence of mobility and e-governance .
Dr. V.K. Jain , Director General stressed on the growing importance of Android .
He told that Android had a worldwide smartphone market share of 75 % during the third quarter of 2012, with 750 million devices activated in total and 1.5 million activations per day.
The operating system's success has made it a target for patent litigation as part of the so-called "smart phone wars" between technology companies.
Key note speaker Mr. Vikas Kumar,CETPA Noida emphasized that Android has a large community of developers writing applications that extend the functionality of devices, written primarily in a customized version of the Java programming language.
Mr Suresh ,Unitone International introduced various tools of Android to the students
Mr. Anjul Agrawal , Vice Chairman, HRGI appreciated the views of the chief guest and various speakers . He urged the students to learn the Android technology .
Dr. Satish Kulhari welcomed all the speakers and delegates . The program was completed with great enthusiasm and a vote of thanks was delivered by Prof. S.K Singh , HOD IT.
Mr. Prashant Bhuyan HOD CSE , Mr. Sandeep Yadav, Mr. Santosh Yadav, Mr. Arvinda Kushwaha, Mr. Gambhir Singh, Ms. Manu, Ms. Yogita Goel and other faculty members of CSE, IT and MCA.
Put in there best effort and making the seminar success. 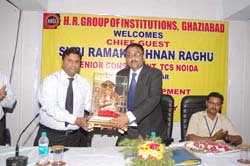 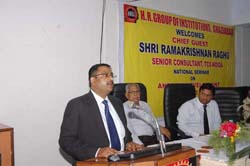